100 Years of Apprenticeships in the United States 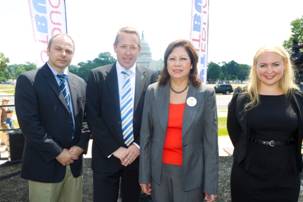 WPC Group CEO Nicholas Wyman and General Manager Joanne Gedge were in Washington to Celebrate 100 Years of Apprenticeships in the United States recently.  The event hosted by Department of Labor Secretary Solis was at the National Mall with Capital Hill in the background. Secretary Solis is a recognized leader on clean energy jobs and she authored the Green Jobs Act providing funding for “green” collar job training in the United States.

Before the official proceedings, attendees had the opportunity to see some hands on interactive displays that set the scene for several moving accounts from young people on how apprenticeships changed their lives. WPC CEO Nicholas Wyman said “The celebration at the National Mall has raised the status and importance of Apprenticeships and Skilled workers to the US economy”.

Initially, Registered Apprenticeship programs in the United States existed mainly in the manufacturing, construction and utilities industries. After the second world war, registered Apprenticeship began to expand more broadly into training of health and safety workers, including firefighters, police, and emergency medical personal.    In 2011, new generations of Americans are engaged in the  ‘earn while you learn’ model with a particular focus on emerging industries such as IT and health care, as well as commercial cookery and child care.

To find out more about the 100 year celebration, please follow the White House Blog.