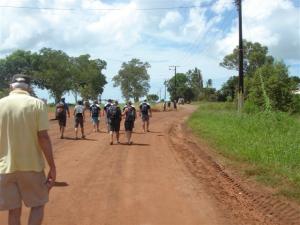 On Thursday March the 11th to Monday March 15th I travelled with Dean Rioli and 14 other people representing their companies on an indigenous awareness trip to the Northern Territory. This trip has been running for 2 years now to make people aware of the boundaries that Aboriginals face in relation to Health, Social, Education and Employment.

On Friday we attended a conference with 2 guest speakers. Professor Jonathan Carapetis is Director of the Menzies School of Health Research. Professor Carapetis is a medical practitioner, paediatrician and specialist in infectious diseases and public health. His research in streptococcal diseases in the Aboriginal population led to the establishment of Australia’s first rheumatic heart disease control program in the Top End. He co-founded the Centre for International Child Health at the Department of Paediatrics, The University of Melbourne. Professor Carapetis’s research is entirely focused on the health of Indigenous people and those in developing countries.

We learnt that the majority of causes of premature death in Aboriginal adults are rooted in early life and in early childhood. That is why it is so important to get it right from the start. It’s a sad fact that young Indigenous people are more likely to suffer from diseases such as pneumonia and that four in five children in remote Indigenous communities experience hearing loss because of severe ear infections. Young Indigenous children are more likely to be hospitalized than non-Indigenous kids, and seven out of every ten Indigenous children can expect to have scabies and skin sores in the first year of their life. Poor health and poor education are strongly linked. A child suffering from poor nutrition or multiple ear infections will have poor concentration and learning ability which can seriously affect the way they live their lives into the future.

The second speaker of the day was Vince Kelly – a former Senior Sergeant of the NT Police and now seconded as the President of the Police Federation of Australia  which is the peak union body representing the interest of approx 50,000 Australian Police Officers. Based in Darwin Vince has seen first hand the struggle of Aboriginal people in the NT with alcohol and drug use. Vince spoke to us about the intervention into Indigenous Communities in the Northern Territory.

Over the next couple of days we looked around Darwin and attended the local NTFL (Northern Territory Football League) – the AFL of Darwin, this is where the likes of Michael Long, Dean Rioli, Kevin Sheedy, Ted Whitten Jnr and Robert ‘Dippa’ Dipierdomenico scout current players and bring them to Melbourne to hopefully achieve their dream of playing AFL. It’s at this time in their career that I work with Dean Rioli and place the players into traineeships or apprenticeships.

On Sunday we travelled 2 hours by boat to the Tiwi Islands (Bathurst) which are located 80kms north of Darwin. The Tiwi Islands lie to the north of Australia’s Northern Territory, and are part of that jurisdiction. Bathurst Island is the fifth-largest island of Australia, and Melville Island is Australia’s largest island apart from the State of Tasmania. It was here we visited an Aboriginal Community and watched the local AFL Grand Final. Tiwi Island is a dry island and no alcohol is to be brought to the island. This is a part of the intervention into Aboriginal communities aimed at reducing crime amongst the locals. Attached are some photos of the Tiwi Islands.

Overall this was a great experience for me to travel with Dean Rioli and to learn more about the challenges that Aboriginals face in the Northern Territory. This visit to the NT further strengthened the relationship between WPC Group and Dean Rioli Aboriginal Employment Services, expanding the training and employment opportunities for our indigenous community.